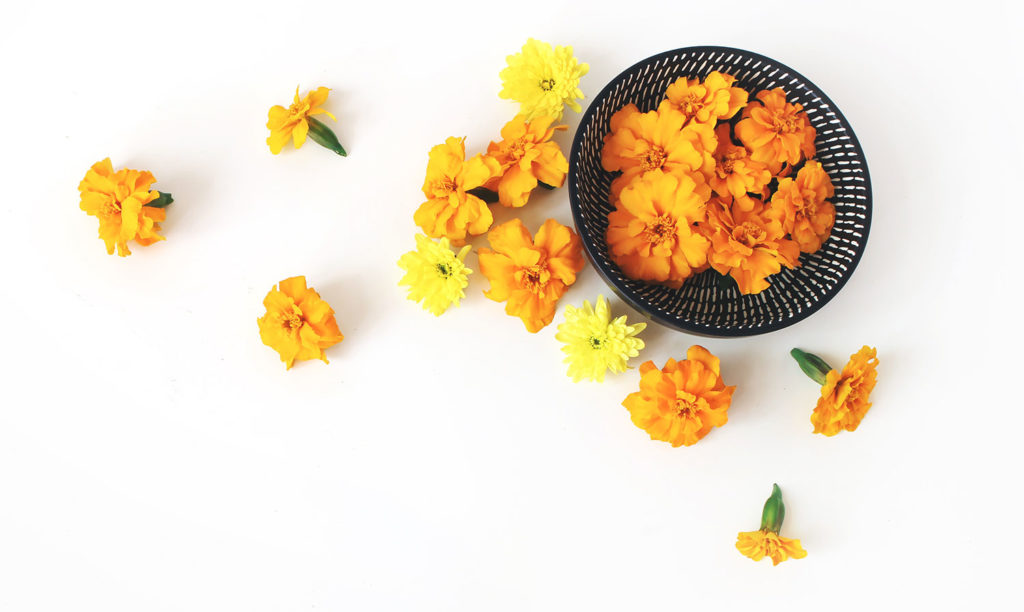 October is here!  The smell of pumpkin spice lattes fills the air yet again, Halloween is just around the corner and fall is in full swing. For the people of Mexico, October hosts another special holiday. Commonly mistaken as the Mexican Halloween, Dias de los Muertos is actually a celebration of family, life, and community.

Traditionally to prepare for the holiday, families set up special, and often elaborate, shrines of their deceased loved ones called ofrendas. These ofrendas are decorated with various offerings including candles, food, photos, and most importantly … flowers. Specifically, marigolds are used because legend says that their vibrant colors and pungent scent help guide the spirits of the deceased back to their families’ ofrendas.

And what a lovely and romantic legend it is in which the marigolds become the star bloom in this special day! This legend originates from a story about two lovers who lived in the Mexican countryside, Xochitl and Huitzilin, who often hiked to the top of a nearby mountain to offer flowers to the sun god Tonatiuh.  Sadly, one day, Huitzilin was killed in battle. So, Xochitl climbed to the top of the mountain alone to beg Tonatiuh to bring back her love. In order to oblige, the sun god answered her plea in a wonderful fairy-tale way .. he turned her into a flower that has fiery colors like rays of the sun, which was, of course, a marigold.  A hummingbird soon came along to drink the marigold’s nectar. Not just any hummingbird, mind you, but Huitzilin, who had been turned into a hummingbird by the sun god.  And the lovers were united once again!

Marigolds are not often used in day to day or special occasion floral design, but when they are, they do have a sweet presence.  Marigolds are indigenous to central America and were used by the ancient Aztecs for medicinal and religious purposes. They even used it to treat hiccups! The Spanish took Marigold seeds back with them to Europe which allowed for different varieties to be bred.

The true Mexican Marigold is called cempazúchitl or “flower of the dead,” nodding to the legend of Xochitl and Huitzilin.  And it continues to star in the ofrendas displalyed during the Dias de los Muertos celebrations and ofrendas, in hopes that the sprits of loved ones will return to their living relatives, as the spirits of these two lovers did so in legend so long ago.