A Look Into Hybrid Flowers and Plants 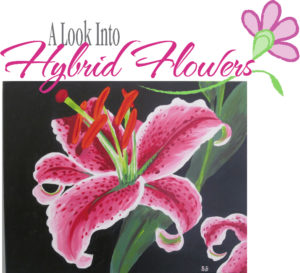 Many modern plants we see around us are hybrids, without most of us even realizing it! The process of creating hybrids is growing more popular over the years, because it can increase the size of a plant and its blooms, it can alter its taste or its color, and it can also help with disease resistance.  A well-known example is the Stargazer Lily!

While hybrids do sometimes happen naturally, most are bred artificially by manual pollination. Natural hybrids are caused by things like the wind, bees, flies, hummingbirds, and moths carrying pollen from one plant to another near a different species. Once cross-pollinated, the seed that grows from it is then the hybrid.

A hybrid plant or flower is genetically different from their parent, similar to humans! Seeds from a hybrid may not produce the same plant, meaning it could  exhibit traits from one or both parent plants; although, many times the hybrid growth will turn out sterile or as an unpredictable outcome. Preferred results can take years of testing to achieve, so due to its extensive pollination process, hybrid plants tend to be more expensive.

Interestingly enough, hybridization was one of [if not] the earliest practices of agriculture (according to Exploratorium.edu). Since then, people have observed that natural hybridization causes genetic diversity and better adaptation of more environments, while artificial hybridization can create combinations of colors and characteristics not otherwise produced by nature, hence their popular appeal.

With a hybrid’s delicacy, they have shorter lifespans but can be stunning when bred successfully. Referring to a process he called “artificial selection,” Charles Darwin proposed that breeding plants and animals could alter species over generations by choosing which individual it mated with. This idea later inspired his in depth theories of natural selection and evolution.

It is important to note that hybrids aren’t to be confused with the process of genetically modified plants (GMO), which is done with gene cloning, not cross-pollinating. With a human touch, and sometimes even without, the plant hybridization process can lead to beautiful works of nature. As intriguing as crossbreeding plants may be, it isn’t a simple task to go unappreciated!